A TOUR OF THE CHURCH

This page is a tour of Corpus Christi Catholic Church in Clifton, Nottingham, England.

It shows what you can see around the church and describes some of the items used in Church services.

The church appears cruciform i.e shaped like a cross but when looked at in plan format there are extra additions to the cruciform shape.

We hope you enjoy your tour!

In Romanesque and Gothic churches the semicircular end of the sanctuary that terminates the chancel, aisles or transepts is known as the Apse. In Corpus Christi the term is being used to describe the back wall of the church behind and beyond the Sanctuary.

To the left of the Sanctuary is the North Transept.

On the back wall are a series of pictures depicting Jesus journey to Calvary where he was crucified. The journey is known as the Way of the Cross. The pictures depict events on that journey and, because they are there to encourage us to stop and think, are known as Stations. There are fourteen Stations altogether. Four are in the North Transept, six are in the knave and four are in the South Transept. They are reproduced with some ideas to ponder as you move from one to another. The reflections are based upon some brought to us by Miss Una Doyle, a Diocesan Youth Officer.

The South Transept provides the link between the Sacristy and the Sanctuary. There is seating here for around 70 people. On the wall of the South Transept are the last four of the Stations of the Cross. 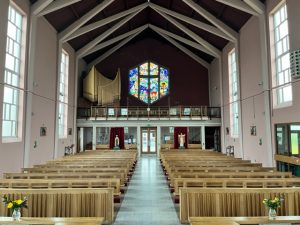 The Nave is the part of the church we first enter from the porch. It is where the majority of the congregation are. Entrance to the Lady Chapel is on the left as you enter.

The Stations of the Cross, the first four of which are in the North Transept, continue in the Nave. Stations 5, 6 and 7 are on the north wall, stations 8, 9 and 10 on the South wall. The final four stations are found in the South Transept The stations give us a chance to stop and reflect on Christ’s journey to Calvary. They are reproduced below with some thoughts for our own personal reflection.

The Choir and Organ Loft

Our choir, when accompanied by the organ, are housed in the Choir Loft. The organ is here too. The loft has a magnificent backdrop in the stained glass window which is set in the west wall.

The porch is the area first encountered when entering the church. A glass screen separates the porch from the nave. The view above is effectively what is seen from the porch.

Above the porch is the Choir Loft and nearby is the bookstall, where a variety of publications are available, and baptistry.

The Bookstall and Bapistry

If in the porch you turn right instead of going into the church you first see the bookstall and, just a little further on, the Bapistry.

The Lady Chapel is a side chapel used for the celebration of the Mass on most weekdays, exposition (showing) of the Blessed Sacrament and for private prayer. There is an Icon of Our Lady of Perpetual Succour (i.e “Help”) and a statue of Our Lady.

This website uses cookies to improve your experience while you navigate through the website. Out of these cookies, the cookies that are categorized as necessary are stored on your browser as they are essential for the working of basic functionalities of the website. We also use third-party cookies that help us analyze and understand how you use this website. These cookies will be stored in your browser only with your consent. You also have the option to opt-out of these cookies. But opting out of some of these cookies may have an effect on your browsing experience.
Necessary Always Enabled
Necessary cookies are absolutely essential for the website to function properly. This category only includes cookies that ensures basic functionalities and security features of the website. These cookies do not store any personal information.
Non-necessary
Any cookies that may not be particularly necessary for the website to function and is used specifically to collect user personal data via analytics, ads, other embedded contents are termed as non-necessary cookies. It is mandatory to procure user consent prior to running these cookies on your website.
SAVE & ACCEPT
error: Content is protected !!